InnoFaire is an event for tech enthusiasts, innovators and makers to showcase their work, and share knowledge. I decided to join this event over the weekend after a long hiatus from joining any tech events this year ;)

There are a total of 9 talks on a wide range of topics in tech. I missed the first two talks though as there's some misunderstanding on the event venue. It's actually a sub-event of the larger GeekSummit and I originally though Innofaire will also using the main hall stage for the talk. So we keep waiting for the talk to start while wandering around the geeksummit exhibitions - it's full of anime lovers and cosplay were everywhere. Fortunately, that's not fully wasted as I managed to have a nice chat with Tevan Raj who run JuniorDev meetup while we waiting for the talks to 'begin'.

The first talk was from James Ing Wei Tang who presents a topic called "Honey, There's a Python in my Android Phone!". His main point is that smartphone nowadays is so powerful, even more than a desktop computer we used to have more than a decade ago. So he said, why put our old phone to waste as we switching to a new phone, if we can make use of it to program some stuff. It's a real computer anyway, and with a couple of useful features like accelerator and GPS locator. So instead of using something like Raspberry Pi, why not use the old phone instead?

So his first idea was to build a simple program to catalog a book. He'd eventually called the project Snapbook. The idea basically to use the phone barcode scanner to read the book's ISBN number and then use that number to fetch some metadata about the book from online resources.

The second talk was by Johar Jaafar titled "Ideas of creation is around us", basically on how to get new ideas to work on for our next project. Where to start? The first is by just duplicating existing app. There's a lot of open source apps we can find online. Just take the source code, change a little bit and who knows, while doing that we can come up with some interesting ideas that can make the app better? Another source of ideas creation also comes from childhood experience. As a kid, there were a lot of things we want to do, right? And now we have all the tools and resources to make our childhood dream a reality. Ideas also come while we just casually hanging up with friends. I think he mentioned an app called Slurp actually came while slurping a noodle. He ends the talk by sharing some stuff he's currently working on, one of it called kachink, an e-commerce platform built with Django.

The third talk from Ahmad Amran, co-founder of car rental platform Wahdah. I'm used to be a regular customer of Wahdah so this definitely something that I look for, to know some internal insight of the platform I was once a user. And it also interesting as this was the first time I met with Amran, while we already know each other online for more than a decade. Amran shared with us how Wahdah uses Google Analytics Enhanced E-Commerce features to track customer behavior at every stage of the funnel before, during, and after a purchase. 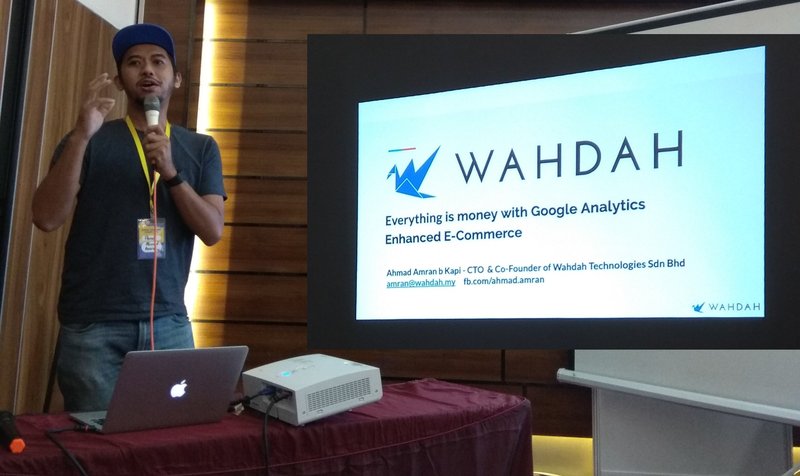 The main question they want an answer is - What car brand produce most revenue? He also shared what advertising channel that produced the best conversion rate? It's no surprise that the answer is through organic search, while paid search come in second. The third is direct acquisition, or in another word, by word of mouth or repeat customer. Knowing that organic search still the best customer acquisition channel, they're doubling their effort in content marketing. As to what car brand produces the best revenue, it is Starex. The second is Myvi while the third is Saga. The problem with Myvi, however, is that it's a crowded space. Everyone offering myvi for rental as it's cheaper.

Using the Enhanced E-commerce plugin also help them to identify revenue by the time of the day and normal time for conversion rate. I asked him whether the Enhanced Ecommerce work similar to Drip but unfortunately he never heard of that.

It's definitely a blast of a full day and definitely exciting after long hiatus from any tech events, I managed to meet some old friends and also get to know new one as well.

Revised pricing for Voice and SMS API in Malaysia market

We were at Malaysia Rice Bowl Startup Awards 2019

Our Annual Open Source grant for 2019